When we started on the faceOff project we were determined to design and build the world’s best sports face protector. We think we have (and the players are beginning to see this as well.)

When it came to assembling the marketing support material, in particular the web site, we contacted the boys at Fracture. This committed and clever group of young New Zealanders designed and built the OBO web site (which went on to win “Gold” in the New Zealand BEST awards.)

There are approximately 110 million web sites in the world. There is a industry based company that organises an awards system for the web industry cleverly called “favourite web site awards”

Sites from all over the world are judged and each day a web site of the day award is made. Usually really big brands win these wards as they have almost unlimited resources to throw at their sites.

On April 24th the faceOff web site won this award ! 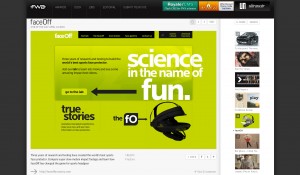 Hard work, commitment, creativity, thoughtfulness and a passion to a great job for faceOff won over the huge budget.

To the rest of us, we should all go forth to the market knowing that yet again OBO and faceOff are being recognised as being leaders on the world stage.

Please visit http://www.thefwa.com/site/faceoff for more details and see some of the sites faceOff was up against.

Great article on the new FaceOff. Coming soon to OBO.

Here’s something i thought might interest you. Its an article by the Manawatu Standard Newspaper on the top secret, brand new OBO FaceOff mask. Its an excellent article and shows just how committed OBO is, not just to hockey goalkeepers, but to defenders and other codes as well.

Want to fire a ball at Simon Barnett’s face at 160kmh? Bring it on, says the director of Palmerston North sports equipment company, OBO.It has taken three years, a four-strong team of designers and a sum of money that he would rather not think about, but Mr Barnett reckons he has the world’s best frontal-impact sporting mask.

Called Face-Off, the mask is designed for players of sports where the danger of being hit in the face by a high-speed ball is high, Mr Barnett said.

“It can instantly deflect a ball travelling at up to 160kmh , not only from damage caused by the ball – abrasions, bruises and cuts – but by attenuating the shock to the brain.”

OBO is a sports equipment m For Face-Off, Mr Barnett and his team built a laboratory to determine the best materials and design to deflect frontal impact.

They tested masks by firing balls at them at speeds of up to 160kmh, videotaping the impact at 2000 frames per second.

Footage taken during these trials, and destined for the OBO website, show masks exploding in showers of plastic, cracking and bending, or sliding haphazardly off the dummy’s face.

After the team had finalised their design, they handed the prototype mask to professional sports players for their opinion.

This was invaluable, Mr Barnett said. English wicketkeeper Matt Prior loved the mask, but said it was uncomfortable when sweating and made hearing difficult. So OBO inserted a layer of padding, and modified the side panels for the finished design, Mr Barnett said.

The mask’s launch is in its final stages, with buyers being sourced and marketing beginning in earnest.

A boost of $217,000 from the Foundation for Research, Science and Technology helped in the making of the mask but Mr Barnett “wouldn’t like to think about” how much money he had spent. He expected enough interest in the product to see a return within three years.

Face Off is one of nine inventions from around the country featuring in the HotHouse exhibition at Lower Hutt’s TheNewDowse gallery until February 14.

Keep an eye out for more information coming soon… The range of graphics are sure to give you attackers a scare on shortcorner plays. To get one of the exclusive Face Off designs click here to go to the Verbunt pages.

About the Face Off
The OBO FaceOff has been developed specifically for the short corner phase of Field Hockey and is not intended for full game usage. It is designed to reduce cuts, abrasions and bruising of defenders.