With the glove offering a large surface area to block shots and turn away the ball on either side, it’s important to recognise that you should be facing them towards the play, so that you are already in a position. Like ice hockey goalies and footie goalies do anyway, with the analogy of already being in the right place for the right time (if that makes sense!). Pro-active and active hands are also better than lazy hands! Up and out is potentially how you want to have your gloves and normally the way to go, especially seen in Australia for example (potentially!), but you do see the same across Europe. And by having them faced, you can move with the glove, rather than trying to push out and swat upwards and at the ball.

With the glove offering a large surface area to block shots and turn away the ball on either side, it’s important to recognise that you should be facing them towards the play, so that you are already in a position. Like ice hockey goalies and footie goalies do anyway, with the analogy of already being in the right place for the right time (if that makes sense!). Pro-active and active hands are also better than lazy hands! Up and out is potentially how you want to have your gloves and normally the way to go, especially seen in Australia for example (potentially!), but you do see the same across Europe. And by having them faced, you can move with the glove, rather than trying to push out and swat upwards and at the ball.

Facing with the glove

Everyone plays differently (we’re all unique!) and how goalkeepers are taught varies according to coach and country (such as European and the styles within that, versus East Asian and so on), but one thing remains the same in the elite goalkeepers’ stances: they gloves are up and ready. Having the gloves forward is pretty universal at the elite levels, with the gloves out in front (although obviously held low can help with corners when diving, balance in kicking etc.). In Australia they seem to be more pro-active with an attacking, extended out ready stance, without making an overt generalisation! The ‘X stance’ has the gloves up and facing (with the legs also spread out to help react against wide shots and also able to close legs quickly for shots in that gap!). Regardless, it is recognised that raised hands are useful; especially important against quick released fast shots at glove height (where you don’t have much time to react, especially against internationals)!

Moving with the face of the glove conjoins with the concept of attacking the ball. With your gloves already in front of you, it is easier to move out to attack the ball; you are already attacking the shot by being in front of it in the first place. Whether this is pushing out from a more inward , or turning and down from a raised and faced glove, you are still turning in and moving to face the shot, to get the most coverage with the surface area of the blocking glove. Or more simply, if they are in an attacking position (i.e. forward and out, already nearer to the ball and cutting the angle), like a baseball catcher would, moving and tracking with the glove, to stop, as the coach in the last clip by Australian hockey talks about and demonstrates.

A sort of premeditated, precursory set-up with your gloves, where you are in a better position to react because you don’t have to bring your gloves up before making the save. By turning with the glove, than by reacting from a lowered position, you can effectively bring them into block more quickly and more efficiently. Instead of ‘waving’ or swatting with your gloves, and trying to push up for the save, you are in a better position. Obviously this is quite a technical case in point, and I can’t speak with reasoning on the depth of technical understanding for now, but this is still acknowledged as , and explained in the clip shown at the end. Facing and turning with the glove is quite revolutionary in some ways, I guess, because we have always been taught to do things differently and react. It’s one way of thinking and not everyone will agree, but you can see the evidence for yourself to consider it. Either way, turning the glove out and open for the save sees you in a position where you have to do less work because you are letting the gloves do the work. I think on shots wide of the body, it is a more grounded argument, than for attacking actively against those shouts closer to the body.

Follow the footage of the following clip (ignore the training without arm pads if you prefer not to!) and notice how when the goalkeeper moves with the glove in a facing position, he is more successful with turning the gloves. This goalkeeper is practising this via working with a BOLA machine so everything is about repetition of shot stopping (to practise muscle memory if nothing else), he is on the same angle, in the same position, facing the same height of shot, but sometimes moves with the gloves properly, other times not. On the shots outside of the body, further away, I feel it’s because he is pushing out in an attack rather than turning out in a clockwise motion with the glove like a baseball catcher’s. This is what the Australian coach explains in a more detailed way how and why the approach works. Notice also, at the end, how he moves like this with his glove and is more successful (at about 1:18).

Some more terrible illustrations (oops!), but showing things might help with visualisation. Here you can see the way gloves move and of turning in a clockwise motion with the glove already facing out, which should help to explain things. As opposed to pushing out in an attacking way, which is obviously different and better for shots nearer your gloves and body. 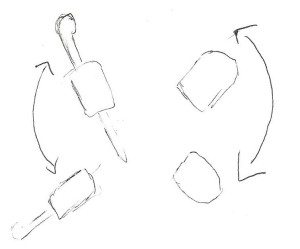 As gloves move out facing in a clockwise motion, they are already in a place to block; the glove is doing more of the work as you just move round in that clockwise motion. 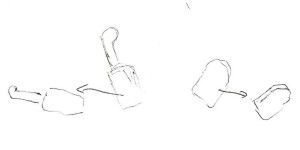 Attacking gloves see the glove pushed out explosively as you look to attack at shot nearer you, finding it difficult reaching out wide of the body.

Engaging with the hips

By making saves from a standing position, you need to be opening up with your body properly, in order for fluid movements for the saving motions. You can’t just expect to be rigid and upright in your stance if you need to move out with your hands to block. So you need to engage with your hips as you turn and push out. Whilst words can explain things to some extent (normally the lesser for some people; with the different styles of learning!) and we all learn in different ways, so getting things across visually will do more to explain things, as you can see it for yourself! And as this is the case, so this clip should do the explaining, with greater analysis by one of Australia’s well known GK coaches. As you watch the differences and analysis, there is a better job of explanation than I can manage right now!

So I recommend you watch this video produced by Hockey Australia which explains it much better than I could! The guys taking (facing, for some reason ‘taking shots’ is more so heard in American lexicon!) shots are Australia U21s as much as I’m aware (definitely happy to be corrected if wrong, usually am!), so at this level, the coaches will be wanting to interpret and improve their technical aspects to an intense level. Notice the in-depth analysis picking apart how the hips need to be engaged properly:

Ultimately, whether or not you want to turn with the glove all the time, it is definitely important to face with them. The more you face the ball with your gloves and the more you are active with them, obviously the better you are going to be with your shot stopping against glove high and wider shots! Rather than swiping at the ball, you are moving with the blocking face already covering to block, as you go. Think of how you show the glove to the shooter; turning it away shows less coverage and gives them more room to shoot into (visually and literally), but with your glove out and facing, this is not the case as you cover more.

However, this is a write-up based on looking into the technique, rather than endorsing it totally (all I do agree with it!!). Purely to proffer some goalie education, to allow for thought and contemplation on technique, rather than arguing which is the most optimum way of doing things, especially if you haven’t seen the video yet!