Our factory seconds sale is now underway. All details can be found here …

From your mates in New Zealand

The Hockeyroos have won GOLD at the Champions Challenge tournament in Ireland after beating the USA in the final 6-1. The tour was a very successful one for us. We came here to win and dominate the tournament but more than that, it was about playing well and putting all the skills and tactics together that we have been working on all year. This tournament was crucial for us! Our win here means qualification in the 2014 Champions Trophy and also a rise in our world ranking. Both of which have a huge impact on the future of the Hockeyroos.

The Champions Challenge started off well for us with 3 solid wins in the round games. Our game against India, who we play often, was a very strong game for us as we managed to put away 8 goals. Belgium and Wales are teams we don’t often face which means we have limited knowledge of how they play. Watching video and researching teams is a big part of our preparation and we are lucky to have access to hours and hours of game footage from games and tournaments all over the world. Every game we play is filmed and coded so we can view old games against certain opposition with the click of a button. Of course the main aim when approaching a match is to focus on our game plan but knowing your opponents does help a lot. I certainly have never played Wales during my career and not Belgium for a long time. European teams also bring a different set of skills. Belgium for example have a girl who can rip a slider better than anyone in the world. This is a powerful and very deceptive type of pass/shot. I was a victim to this slider in our first game against Belgium but luckily managed to save two before she got one passed. We comfortably won the game 4-1. Wales were our third opponent and certainly put up a good fight. It wasn’t until the last five minutes that we secured the win with two goals. Emily Hurtz played a stunning game scoring 3 of our 4 goal total. A hat trick in any sport at any level is a pretty cool achievement.

Our finals campaign started with a quarter final against South Africa which was a tough match. Having faced them recently at the Olympics in an equally tight match the team was feeling reasonably confident but equally a little nervous as with all finals. We prepared as we always do; breakfast, team walk and a stretch in the morning, lunch, pre game meeting then put the tunes on and start getting ready. Music is a big part of our preparation and tune selection is very important 😛

We played well against SA and created numerous scoring opportunities. They threatened us on just a few occasions so 2-1 was not a great scoreline but in a final you take a win no matter what the score. Our semi final was quite similar. We played Scotland who put up a good fight but thankfully our twin towers (Jodie Schulz and Anna Flanagan) both slotted a drag flick each to win the game 2-0.

Of courses it hasn’t all been about hockey. We have had a bit of time to explore Dublin, find some nice local coffee shops and go for some walks. Naturally, being the age we are, the internet consumes most of our time. My roomie Jade Close and I have tried to start a ‘no phone at meal time’ revolution but as you will see in the photo below it has not really taken off. Our excuse is that we like to stay connected and admittedly most of the time we are either skyping home or chatting to friends and family on Whatsapp. Oh and there is Twitter, facebook and blogs like the one you are reading. Ah well, its all good fun.

How it all ended:

Australia reclaimed their place at the top table with a comprehensive victory over USA to claim the big prize, the Electric Ireland FIH Champions Challenge 1 title, along with a place back in the Champions Trophy. In a 6-1 thrashing the Aussies controlled the game certainly outclassed a spirited US side.

Thanks as always for following and for the support. Bye for now 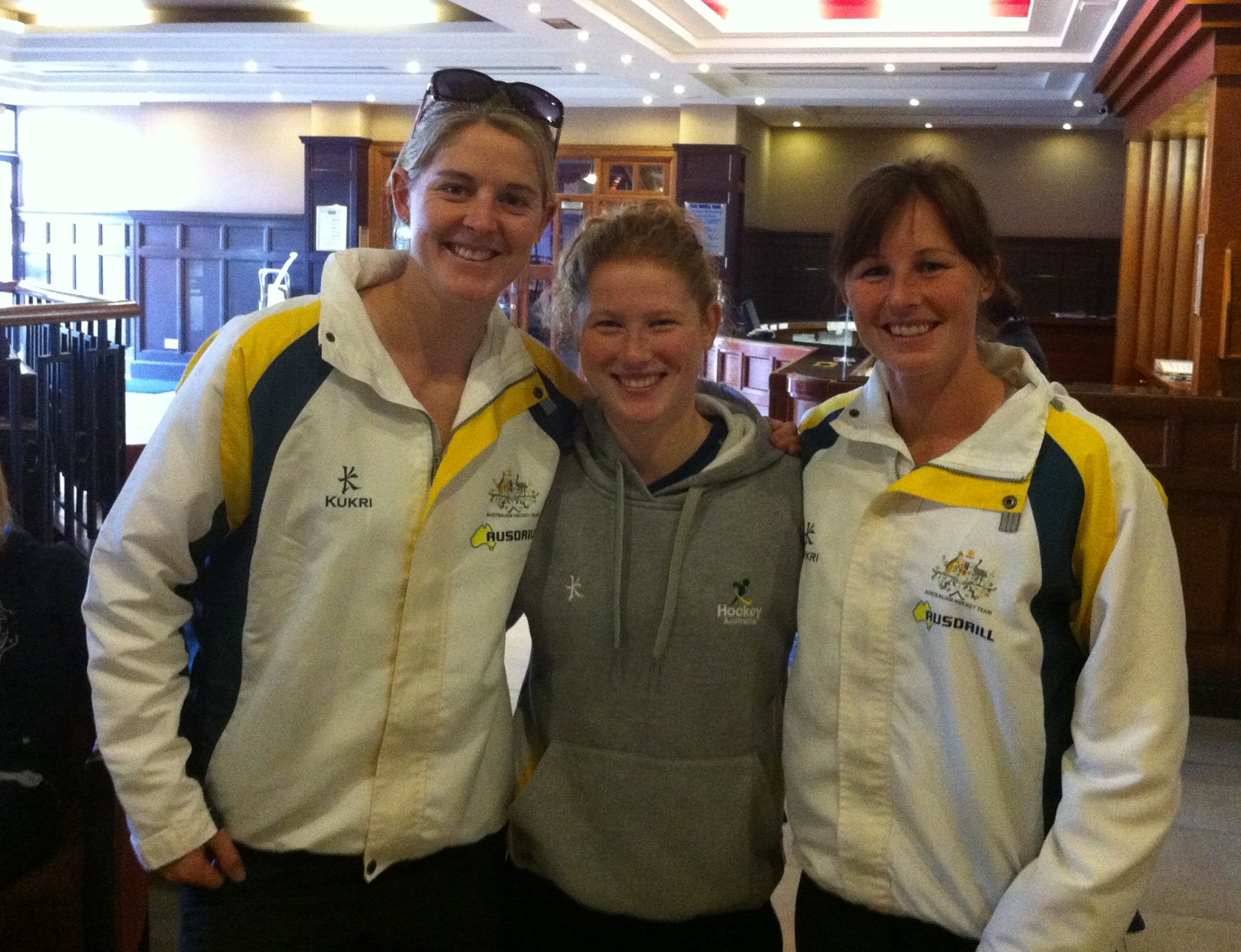 Trying to stay warm at the hockey Trust, trust, trust. Trust in yourself, trust in the coaching staff, and trust that you are doing exactly what you should be doing.

I was so grateful for the Olympic experience that I had. I have been playing hockey at this level for 12 years, and this is the first time I have been to a tournament as the only goalkeeper. Before the tournament I thought that maybe it would be a lonely time, mainly before and after games, but it wasn’t. The times that I had to myself were good for mental preparation.

The extra pressure that I normally put on myself about whether or not I will play the next game was eliminated. I could just play and for me that worked. I was the best prepared I have ever been. I have had many experiences over my career both good and hard, and all were a driving force to get me prepared for the Olympics. This also fuelled my determination to perform to my best during the tournament.

Over the years I have learnt to deal with distractions. Like the distraction of already being a couple of minutes behind in your warm up, walking out from the change room to the pitch and realising once you get out there that you have forgotten your right glove. My on ball warm up can’t start without my right glove. So I asked the girl warming me up, very nicely, if she could run to the change room and get my glove. I just grabbed a ball and started juggling it to warm up while I waited for her. There was no need to make a big scene, I am sure most of the girls and some of the coaching staff didn’t even realise that I left my right glove in the change room. She got back out to the pitch, both of us were very calm and we started the on ball warm up. It was our 3rd game of the Olympics vs USA, I saved a stroke that game and we won 1-0. Being able to deal with distractions both on and off the field is very important.

All the best … Toni