As a goalkeeper it is very important that you know the roles and responsibilities of every position in Penalty Corner Defence. It is your job to control the circle and therefore the PCD. You will be given guidance from coaches along the way but if you know each position then you can be confident in your job and help your team mates if they are unsure.

Firstly I need to explain that there are many ways to defend a penalty corner with the most common being a 1:3 set up. I wont go into detail with them all but the roles of each person change slightly depending on the way you run out. The explanations below are based on a 1:3 structure.

Goalkeeper: First role is to save the shot. If it is a flick then you need to be standing and if its a hit you must be lying down. When lying down you should be able to cover most of the goal. When fully stretched out your left glove and stick needs to cover the right post. Your stick may hang over a little bit but it is important you can save everything that is on the ground or in the air on that side. Once the first save has been made you need to be back on your feet for any rebounds.

Left Post: First role is similar to the goal keeper. Save the shot. The posty needs to stand to the goalkeepers left and either in line with or in front of you. When you lie down they need to cover the rest of the goal as unless you are six foot four you will not be able to cover it all. Second role for the posty is to go for any R2 deflections. This is very difficult as they must not move off the post too early but if they can read it then they should go for it. The final role is to clear the pads. If the ball stops in front of the goalkeeper then the posty must turn, block out the attackers and clear the ball wide.

Right post: This position has a number of responsibilities and requires a bit of multi tasking. They should stand on the outside of the post and about three steps in front of you to start. First task is to block out any deflectors that come in on the left side. They must also be ready to intercept any balls that go back to the push out. The third job is to block out any rebounders and clear the pads if necessary.

Second runner: This person has the role of stopping the R1 deflector from getting in to a goal scoring position. They can use their body to block them out or just stand in front and make the trap. It is important that they stand just outside the line from the ball to the post if possible so that the posty has clear vision. 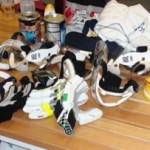